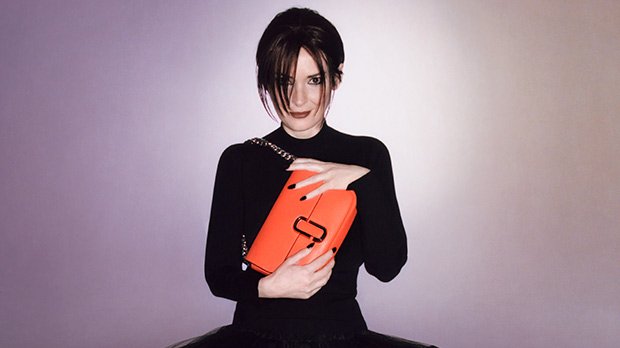 Winona Ryder was a style icon back in the 90s and the actress proved she still is one, as she starred in a new Marc Jacobs campaign. The 50-year-old modeled the new J Marc shoulder bag and she looked fabulously edgy in a slew of black sheer outfits while her dark hair covered her face.

Winona first starred in a Marc Jacobs campaign almost 20 years ago and now her life has come full circle. In the new campaign, Winona looked edgy and cool in a tight black turtleneck tucked into a high-waisted, sheer black tulle maxi skirt while holding a neon orange purse.

Her dark hair was tossed back into a bun while her long bangs covered most of her face. Meanwhile, a super dark eyeliner, a dark brown lip, and black nail polish completed her glam.

In another photo, Winona rocked the same glam while wearing a plunging black dress that revealed ample cleavage which was covered by a neon green purse. The sexy frock featured long flowy sleeves and a maxi skirt, and she acessorized with sky-high, yellow leather lace-up platform boots.

Another one of our favorite photos pictured Winona wearing a black, crushed leather and sheepskin-lined coat with a sheer black lace tank top underneath. In the photo, she covered up her face from the flash with her hand.

Designer, Marc Jacobs, was so happy to be working with Winona again, that he commented on the campaign video, posted to the brand’s Instagram, writing, “My Winona,” with a red heart.