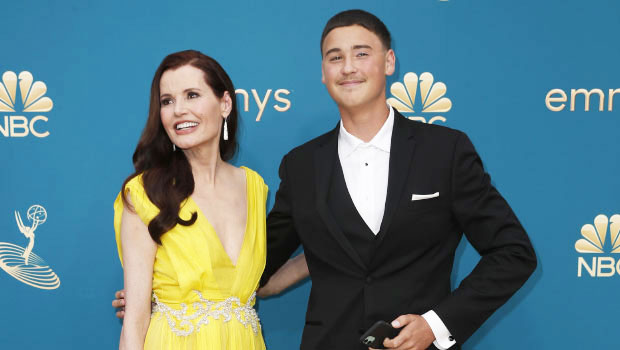 Geena Davis stepped onto the gold carpet with a beautifully coordinated look. The Academy Award winning actress, 66, appeared at the 74th Primetime Emmys on Monday, September 12, in a sweeping yellow chiffon gown, alongside her son, Kian, 18. While the fraternal twin of Gina and her ex  husband Reza Jarrahy wore a traditional black suit, sans tie, Gina went next level with the regal plunging look, which featured delicate details at the gathered waist.

The Thelma & Louise legend accessorized with modern drop earrings and wore her long brunette locks in soft waves around her shoulders. Her makeup was done in tastefully natural shades. The actress’s Geena Davis Institute on Gender in Media is expected to receive the 2022 Governors Award “in recognition of their efforts to promote gender balance and foster inclusion throughout the entertainment industry,” the TV academy said of the honor, per The Hollywood Reporter. “We are incredibly honored to receive this award from the board of governors in recognition of our work,” Geena said, according to THR. “We know that in many sectors of our society true gender equality may take many years to achieve, but there’s one space where parity can be reached virtually overnight: on screen.”

“Since 2004, the Institute has been fighting for equality and representation, long before it was comfortable to take that stand, said Kim Taylor-Coleman selection committee co-chair for the Governors Award, according to the publication. “The Television Academy is honored to add the organization to the prestigious list of recipients.”

Gina and Reza, a surgeon, settled their divorce back in October 2021, following a five year long separation and custody battle beginning in 2017. They were married for 16 years and share daughter Alizeh, 20, and fraternal twins Kian and Kaiis, 18. The A League of Their Own beauty has had a number of high profile marriages, including a relationship with Jurassic Park star Jeff Goldblum, Richard Emmolo, and Renny Harlin.