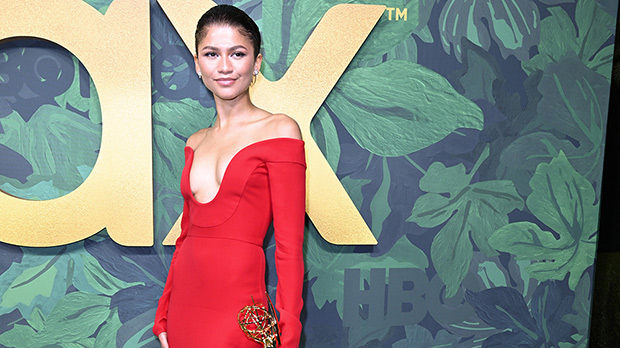 Zendaya looked absolutely stunning while attending the HBO Emmy Awards after-party on Sept. 12. The actress, who took home Outstanding Lead Actress in a Drama Series at the Emmys, wore a red, Maison Valentino gown for her after-party look. The ensemble featured an off-the-shoulder neckline that led into long sleeves and a low-cut plunge in the middle. The rest of the dress hugged Zendaya’s figure to perfection, and she posed while clutching her Emmy at the party. To complete her after-party look, Zendaya slicked her hair back into a sleek updo.

The after-party ensemble was quite a contrast to the softer look that Zendaya wore at the actual show. Her old Hollywood-style red carpet look for the Emmys featured a strapless black ballgown, along with a diamond choker necklace. Her hair was pulled back into a tight half ponytail, giving her a younger, cuter look for the award show.

Zendaya made history with her win at the Emmys, which was her second for her role as Rue in Euphoria. After taking home the trophy, she became the youngest woman to win two acting Emmy Awards, as well as the first Black woman to take home Lead Actress at the show two times. However, last time Zendaya won, it was in 2020 amidst the coronavirus pandemic, so she was only able to accept the award virtually. This was her first time taking the stage to receive her Emmy in-person.

Euphoria’s second season aired at the beginning of 2022, and in the midst of it, the show was renewed for a third season. However, very little is known about the upcoming season. A premiere date has not been confirmed, and filming has yet to begin at this point. Zendaya is currently hard at work filming Dune: Part Two, though, so there’s plenty to look forward to!